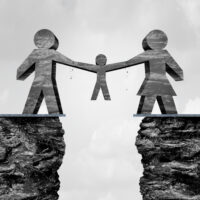 In most cases where the parents of a child are not in a relationship and do not live together, whether due to divorce or other circumstances, one or both parents will seek to define the support and custody arrangement for the child. In some cases, the parents have an amicable relationship and can come to an agreement regarding child custody and support without court intervention. Regardless of the cordiality of the co-parent relationship, however, it is prudent for the parents to reduce the agreement to writing and file it with a court that has jurisdiction over the matter. This ensures that the terms are clearly defined and allows for the enforcement of the agreement should the relationship sour. In cases where the parents are unable to come to an agreement regarding their parental rights and obligations, either parent may file a lawsuit seeking custody or support of a child, and the court will ultimately issue an order determining custody and support. In either circumstance, it is important to include a provision that will allow for a modification of both the custody and support of the child.

As a child grows older circumstances change, and what may have worked best for a child or his or her parents when he or she was younger may no longer be practical or beneficial when the child is older. Situations that may necessitate a change to a child custody arrangement include a change in the school the child attends or an increase in a child’s needs due to situations such as illness or mental health or developmental issues. Additionally, if a parent is in violation of the current custody arrangement, it may be grounds for modification.

Child support orders or agreements are often modified as well. If there is a change in the custody of a child, it may precipitate a request for a change in the support agreement or order, as the amount of time each parent is required to provide for the child will have changed. As a child grows the cost of caring for him or her may change, which is also grounds for modification. For example, there may be a decrease in cost when caretakers no longer must be paid to care for the child, or an increase due to greater costs of activities or educational expenses. Additionally, a support order or agreement may need to be modified due to a fluctuation in the income or expenses of a parent.

If a parent is no longer able to meet his or her support obligation, he or she can request a modification. Similarly, if either parent receives a substantial increase in income, his or her co-parent may request an increase in the support obligation. As noted above, a court choosing whether to modify a support agreement will always act in the best interest of the child involved.

By Fort, Holloway, & Rogers | Posted on July 2, 2021
« Emotional Expectations During Divorce And How To Cope
Child Relocation »